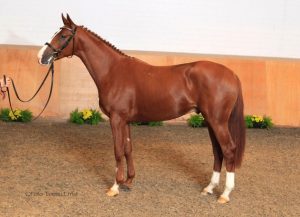 Rusticus is a German approved Stallion that has begun his show career as a 4 year old in 2015. Approved in 2013 by the German Trakehner Verband and was given the award of Best Anglo-Trakehner. Out of 48 stallions to be approved Rusticus was one of nine to be approved as stallions.

His first show was June 27 2015 at Chattahoochee Hills as an open novice with 12 starters. Rusticus placed 4th in Dressage.