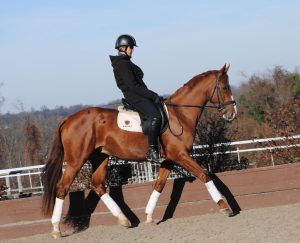 German-born and trained dressage rider Silva Martin is a successful competitor and sought-after trainer and coach. She and her husband Boyd, a member of the US Eventing Team, own and operate their farm, Windurra, in Cochranville, PA. Having relocated to the US from Australia in 2007 and now representing the USA in competition, they have quickly become some of the most sought-after trainers in the United States.